Can a laptop be assembled? The answer is YES. You can make a custom laptop as per your requirement. Laptop cabinet price in India market is in the range of 2000 to 6000 Rupees. Next, you need Laptop motherboard, RAM, Graphics Card(optional), SSD (or HDD), DVD RW (optional), screen, battery, and a charger. The total cost of all these things will come to around the same amount, in which you can buy a best-selling HP laptop with similar configuration. That is why the assembled laptop is not in trend.

Instead of a fully assembled laptop, you could try for a semi-assembled laptop. Buy a less than 1-year used HP laptop. Change its hard disk to SSD. Increase its RAM or leave that as it is. If required change its battery, too. Fitting hardware of your choice on a used laptop would save lots of money. By spending close to 25000 Rupees, you will have a machine in hand much faster and stable than a heavy-duty laptop priced above 50000 Rupees.

The laptop model is currently the only HP SSD laptop below 35000 Rupees. Its configuration makes it perfect for students, home use, executives, and similar other basic users.

Why the HP laptop is so cheap? Because of its Pentium processor. HP used an Intel Pentium Silver N6000 processor on it. The processor is resourceful but not enough to manage hard multitasking, gaming, and professional work. Other features, functions, and build quality of the HP laptop are however very impressive.

Should you buy the HP dq3033TU laptop with Intel Pentium processor? Yes! Grab it before it becomes out of stock. The reason is the trust of the HP brand in the laptop market and the quality of the product. But remember it is just a general use laptop, nothing much.

The brand HP has three outstanding portable laptops in the price range of 35000 Rupees. They are cs0023TU, cs0029TU, and cf3047TU laptop models. 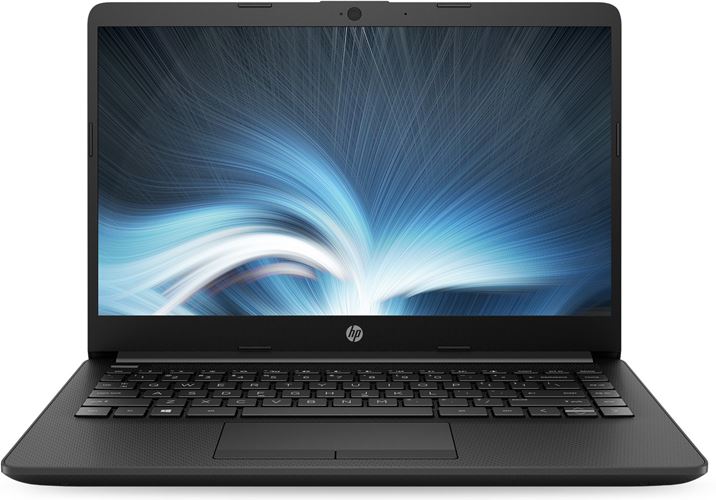 The laptop model cs0029TU is an upgraded version of the cs0023TU model. The successor is faster and more multitasking-friendly than the predecessor. However, the model cf3047TU, which is the latest laptop of HP below 35000 Rupees, is faster than the cs0029TU model in terms of multitasking and gaming performance.

Thus, the laptop model cf3047TU is the best HP laptop under 35000 Rupees presently. It is a suitable portable computer for students, home use, and office executives.

The Avita multitasking laptop is an ideal choice for students and home use. It is not a gaming laptop, but it can play all those games that don’t require dedicated graphics support. Having it the Windows 10 operating system with S-Mode makes it a safe laptop for doing online transactions, trades, and browsing. The limitations of Windows with S-Mode are many, though. We discussed that all in our video presentation below.

Avita Pura is a good option but not the best option if you are looking for an 8GB RAM laptop with SSD memory below 35000 Rupees. Currently, two HP laptops with 8GB RAM is available on the market in the same price range. Those HP laptops have preinstalled license MS Office 2019 Student program as well. Apparently, they worth much more than this Avita laptop in almost all segments.

The HP laptop is a successor of the very popular HP cs0023TU laptop model. Differences between these two identical laptop models are just a few.

The HP cs0029TU model is powered by the Intel i3-8th generation processor whereas the HP cs0023TU model is backed by the Intel i3-7th generation processor. Both of them have 8GB DDR4 RAM. But the RAM frequency of the former is 2400-MHz and the same of the later is 2133-MHz. Because of these two factors, the performance of the successor is slightly better than the performance of the predecessor. Since both are priced 33990 Rupees, buying the successor should be a default choice. 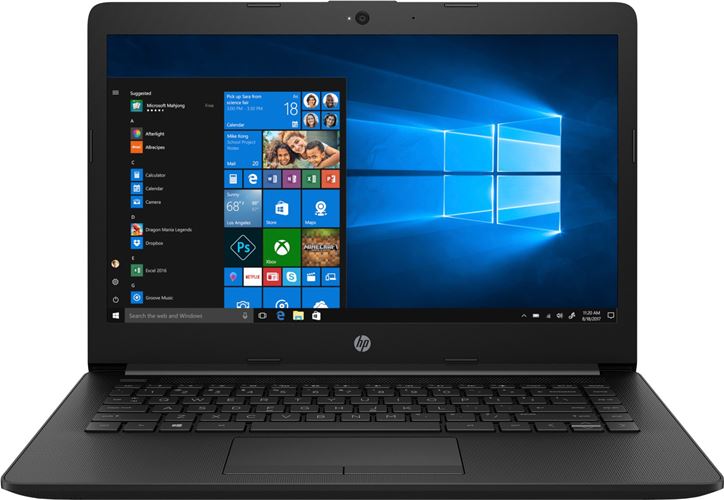 If you are looking for an HP laptop below 35000 Rupees with an Intel processor and 8GB RAM, then two available options are cs0023TU and cs0029TU. As I said above that the better option between them is the one that recently became available on the market.

The latest HP laptop with SSD storage is the model du0050TU. This HP laptop runs on a licensed Windows 10 operating system. It also comes with a preinstalled student version of MS office 2016. That is basically a limited version with Word, Excel, and PowerPoint only. Full version license you have to buy from Microsoft. Since 99% of the laptop users only need the three Microsoft office programs, the restricted student version makes sense. Something is always better than nothing. Isn’t it! 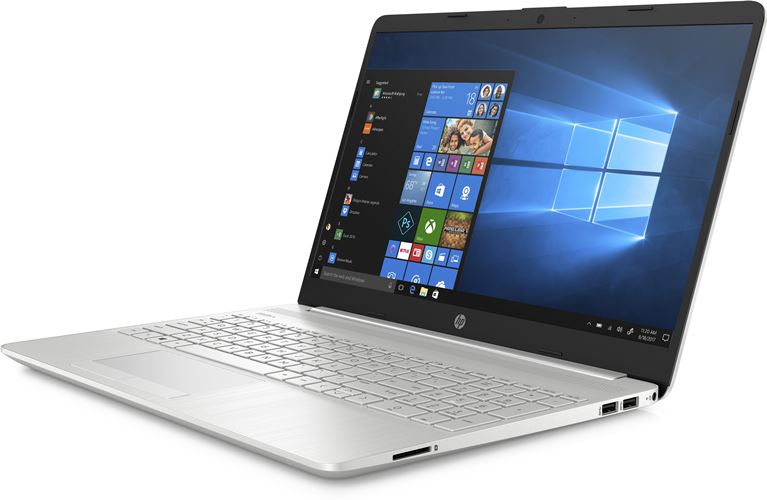 The performance and build quality of this HP SSD laptop is excellent, too. Not having an unnecessary DVD-RW drive makes it a lightweight, portable machine. So, it is a perfect laptop for travelers. Besides, thanks to SSD and Intel processor, its multitasking ability is much better than I had expected.

This HP laptop with SSD memory and Intel processor can play games really well. However, if gaming is your top priority, then you should consider HP db0239AU laptop with an AMD processor. It will cost you around 34000 Rupees.

The touchscreen laptop is a convertible one and is held in place via two hinges shining in silver finish. You can change it into easel style or just a framed tent or even the full tablet mode with a complete bend. Its lightweight nature comes in handy when you hold it in tablet mode though.

Acer offers Windows 10 Home pre-installed with the laptop something to feel good about. The display is HD, which further supports 10-finger touch. The audio profile on this convertible piece is pretty good adhering to Acer’s TrueHarmony High-performance sound System and is processed via two stereo speakers.

It’s equipped with Core i3 flanked by a 5400 RPM HDD, which is not a bad thing to have but does tend to pale in comparison to other options available in the market. The boot-up process takes quite a time but makes up for it with efficient, non-leggy performance once it is up and running.

The touchscreen is a delight to use, and both the tent and tablet mode comes in real handy. It’s also lightweight facilitating the convertible breed. Acer SP315-51’s display is excellent and offers clear, crisp, and sharper images and videos. There’s nothing wrong one can find with the display aspect of this one. Moreover, there’s plenty of juice onboard with the presence of 3220-mAh battery that can run up to 9-hours.

There’s not much heating issue with the laptop unless if you’re into high-end gaming or high-graphic endurance regime. Acer has made this one as a viable convertible piece with almost all the requisites one can seek from a piece, and that bodes well.

Final Conclusion: Touchscreen laptops are the current trend and are what every laptop user wishes for as part of their next best thing. Add the convertible clan to it, and it’s a hurrah for laptop enthusiasts all over. It’s a reason why the sales of these machines are picking up at such a high pace. We picked the best of the lot and presented them for you as part of our review series. We would love to hear your thoughts on this one. Do let us know about it via the comment box. Till then, Adios.

The latest HP SSD laptop is an excellent choice for anyone who wants a fast laptop with MS office 2019 from the price range of 30000 to 35000 Rupees. HP eq0007AU laptop model is powered by an AMD Ryzen 3 Dual-Core processor.

The HP eq0007AU laptop is incredibly fast. It boots up instantly (in less than 5 seconds) and manages heavy multitasking with ease. This SSD laptop can play all those games that do not require a dedicated GPU and more than 4GB RAM on the system.

Having MS office 2019 student version preinstalled is another reason to consider the HP laptop. The program includes its three modules: Word, Excel, and PowerPoint. That is more than enough for general users. HP eq0063au is an ideal multitasking laptop. Its performance is very fast thanks to the latest version of the AMD Ryzen 3 dual-core processor. The processor variant is the fastest among all the variants of this AMD processor launched so far.

Another big reason to buy the HP laptop is MS Office 2019 Student Version. The MS Office program on this SSD laptop includes Word, Excel, and PowerPoint.

Are you looking for a lightweight portable laptop with fast performance? The HP laptop under 32000 Rupees is lightweight, portable, and its performance is really fast because of SSD memory. The primary memory of this HP laptop is 256 SSD. So, it boots fast. Its power consumption is close to 30% lesser than laptops with HDD as primary memory. Moreover, because of SSD, Its OS will not crash.

HP cs0019TU laptop has a genuine Windows 10 operating system and MS Office 2019 Student version is preinstalled on it. So, it is a perfect laptop for students and office executives as well.

The 41-Wh Li-ion battery of this HP SSD laptop fuels up fast and lasts much longer than the usual battery life of a laptop with HDD memory. Thus, you can freely use this laptop in a park, library, in fact anywhere outside without being worried about its battery life.

HP trust, Intel processor for multitasking, 256 SSD for fast performance and data security, and MS Office 2019 Student Version with lifetime license – are the 4 best reasons why you must consider it. If you need a general use laptop then go for it.

Presently, the HP Laptop is the best laptop with SSD Drive in 32000 Rupees. There is no laptop in 30000 Rupees range, which could match it in terms of features, functions, and performance. Intel i3 Processor, 8GB DDR4 RAM, 256GB SSD, Windows 10 OS, and lightweight build are the 5 key factors why it must be at the top of your list of favorite laptop models.

HP never disappoints with its product quality. The same is true for this laptop model also. HP cs0023TU laptop has a portable profile and durable build. As weighing less than 1.5-kg, it is an excellent laptop for frequent travelers.

Battery backup of this HP SSD laptop is far superior, too. Primarily because of SSD drive and a powerful 3-Cell battery, you would get more than 7-Hours of battery backup. Interestingly, even after a year, its battery backup will not fall below 4-Hours. I could claim this because of the SSD drive onboard instead of an HDD drive. Also, the HP brand provides a 65W fast charge to quickly fuel up the battery.

There are two excellent SSD laptops in 32000 Rupees range currently. The first is this Avita Windows laptop with 128GB SSD. The second is the Asus X412UA-EK341T laptop, which has a 256GB SSD memory. Between them, the best laptop is the Avita laptop as it features Intel i5 Quad-Core processor and 8GB RAM. Whereas the Asus laptop has only 4GB RAM, and its processor is Intel i3 dual-core.

The 14-inch full HD screen of this Avita laptop features IPS display panel. So, its screen quality and clarity are mind-blowing. Added 2-Cell battery would last up to 10 hours, Avita brand claims. Besides, this laptop is super light in weight, weighs only 1.46-Kg. It is a perfect choice for frequent travelers.