Where would you prefer washing your favorite movie? On a big screen LED TV with 4K resolution or traveling to the nearest multiplex? I would prefer watching my favorite movie on a big screen LED TV. Watching a movie at home brings lots of freedom. It is your space. Enjoy your time the way you wish to. No one is going to set rule here. To watch a movie in much better quality than you get in a multiplex, in this piece we cover the latest 4K LED TVs with a big screen. If your budget for your new 4K LED TV is in between 60000 to 65000 Rupees, here you find the best options on sale In the Indian market.

The Thomson Android TV is available in four screen sizes: 43-Inch, 49-Inch, 55-Inch, and 65-Inch. These variants have similar features and screen quality. Outstanding picture quality, loud and clear sound, and the Android operating system are three big reasons why this Thomson 4K smart tv is one of the best LED TVs under 65000 Rupees. Among the four variants, the best is the 65-Inch variant as it features 40W sound system. The rest three options, whereas, have a 30W audio system. Apparently, in the selection of LED TV, bigger is always better. 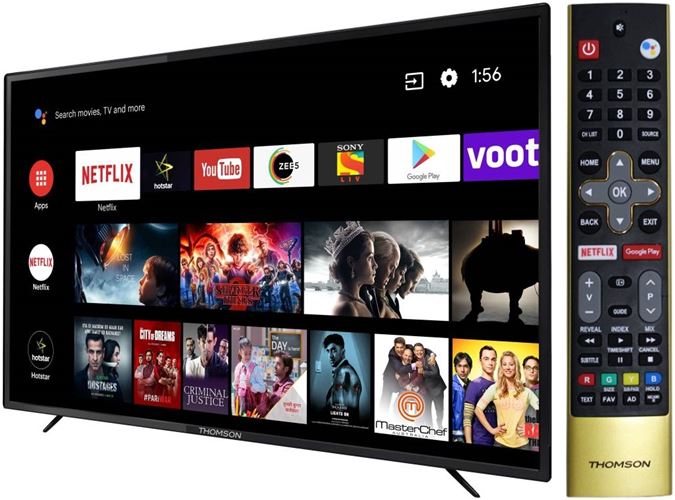 The most significant advantage of buying an Android TV is that you do not check the list of preinstalled apps. From built-in Google Playstore, you could download all your favorite TV apps.

The display panel of this Thomson 4K TV is A+ Grade panel from Samsung. So, the quality and durability of the panel are unquestionable. However, this 4K TV fails to impress when playing real 4K content. The reason is it lacks UHD technology, which is master of the roster in delivering 4K content in actual 4K quality. The 4K resolution simply means using 3840×2160 pixels to create a picture frame on a digital display. The real thing, however, is HDR technology, which lifts, processes and presents the content.

The sound quality of this Thomson Android TV, on the other hand, is outstanding. The 65-Inch smart TV has two box speakers and Dolby sound technology with DTS Surround Sound effect to generate 40W loud and clear sound in cinematic audio format.

Eventually Vu, the most favorite budget LED TV brand in India market, launched its Android TV. Vu brand has introduced this Android TV model in three screen sizes: 43-Inch, 55-Inch, and 65-Inch. These variants are currently a top favorite in their price segment. I recommend the 65-inch variant since it comes with a powerful 30W audio system.

The screen quality and clarity of the Vu Android TV model are spectacular. Absolutely no color fading while viewing from sides. Vu brand’s 178° viewing coverage claim is factual. The color on the screen looks natural, real. So is the sound quality of this 4K Smart TV model. Especially the 65-Inch model roars like a giant lion. Its 30W speaker system produces loud & clear, punchy sound.

Since it is an Android smart TV, you can install all your favorite apps from Google Playstore. Also, thanks to the stock Android user interface, the performance of this Vu Android TV is fluid, no lag at all.

Many of my friends have a fully functional Vu LED TV in their home from four-five years. Yes, you can trust the build quality of Vu LED TV! Hence, the 65-Inch Vu 4K Android TV in 65000 Rupees is a much better option than a 65-Inch either LG, Samsung, or Sony 4K LED TV in 250000 Rupees.

LG is not about to be left out in what seems to be India’s most exciting technology. 4K televisions have gained a lot of popularity in India. This explains why every TV brand is placing a flagship product in this lucrative market. Nonetheless, just as with all electronics, high-end products from renowned brands like LG, always attract a hefty price tag. Even so, premium products never disappoint. The 49-Inch LG 49UJ632T 4K UHD LED Smart TV is LG’s flagship 4k television in India.

As we begin our review of this LG 4K smart TV, it is important to note that LG is competing with some new brands in this price margin. Surprisingly, some of these brands are selling their bigger 4K TVs at a cheaper price than this LG TV. By the end of this review, you will be able to give sound judgment on which 4K television is better. Here are our findings on the LG 49UJ632T LED TV. Outstanding 4K experience: The first time I watched a movie on a 4K resolution TV, it was a 32-inch TCL LED television. Now, after watching the same movie again on the LG 49UJ632T 4K TV, I can attest that the experience is downright poles apart. This LG television uses an Ultra IPS 4K panel. This type of panel ensures consistency in both color and contrast levels regardless of the angle you are watching from. Conventional 4K Televisions use standard panels, which are not very good with fast motion scenes. In contrast, IPS 4K panels offer blur-free imaging even in fast motion scenes.

4K upscaling with Active HDR: As if this is not enough, LG also integrated a 4K upscaler in this television. This tells you that the picture is enhanced even in live broadcasts. Live broadcasts tend to look hazy at times, but not with this television. On the other hand, Active HDR technology in this television provides precise and vibrant imaging. This means that you can watch HDR content seamlessly with this TV. When combined, these two features make the 49-Inch LG 49UJ632T UHD TV the best 4K smart TV below 70000 Rupees.

Easy to use Interface: This LG UHD Smart TV runs on the intuitive webOS operating system. WebOS happens to be one of the easiest and user-friendly TV Operating system in the market today. Moreover, LG made sure that the remote control for this gadget is as straightforward as possible. The remote provides a universal control over all the features of the TV. It includes a scroll button, a magic zoom button and two hotkeys, one for Amazon and the other one for Netflix.

Stable operation: The manufacturer built this television in such a way that it supports multitasking efficiently, without freezing. This LG 4K smart TV has a total audio output of 20-Watts. Additionally, you can connect this TV to external speakers via Bluetooth, since it supports Bluetooth connectivity.

Sony should be your preferred brand If your budget for a new LED TV is above 50000 Rupees and you want your new smart TV to have a spectacular screen and incredible sound system. Based on my years of experience in observing LED TV what I learned is that LG gives more priority to convenience features, Sony gives high priority to sound and screen quality, and Samsung’s top priority is build quality.

The 20W Bass reflex speakers with Dolby sound technology provides loud and clear sound. Especially at night when outside noise is less, at full volume, this 4K smart TV will generate cinema hall kind of sound experience in the room.

I will strongly recommend not to watch horror movies on this TV alone in the night. Its screen quality and Bass dominant sound feel so real that you will live the moment in the scene. For testing, I watched RAAJ movie (Bipasha Basu starrer) on this TV. It was a terrible experience.

Best Coffee Maker Machine below 1000 Rupees for Home Use