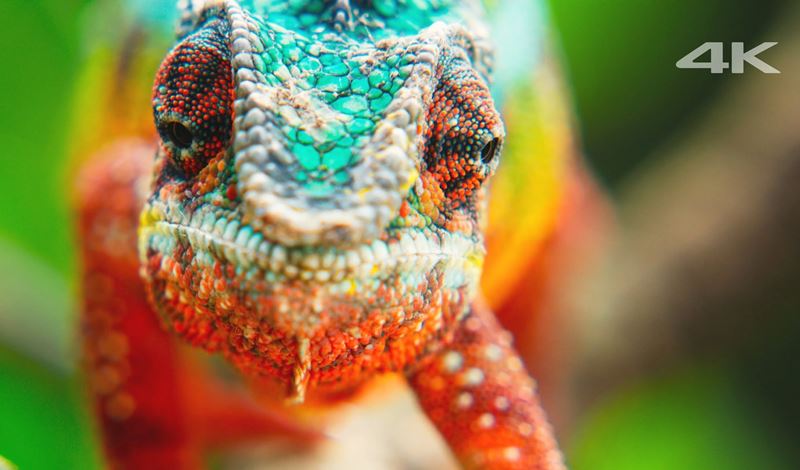 Cutthroat competition in the LED TV market has paved the way for much affordable 4K smart TV. Nowadays it is possible to order a branded big-screen 4K LED TV online by spending less than 50000 Rupees.

Which is the best 4K smart TV under 45000 Rupees? This review article covers the top-rated big screen LED TV in India market from 40000 to 45000 Rupees price range. The recommended LED TV models are currently a top-favorite of buyers.

The Vu TV is the only TV model in India market with a 100W soundbar. Yes! Correct. The soundbar comes with six JBL speakers and together they generate loud & clear sound with heavy-punchy bass. There is no other TV model on the market currently that can match this Vu Cinema TV in terms of sound quality. That is also because of having the Dolby and DTS sound technology.

The same goes for the screen quality of this Vu smart TV. Features such as Dolby Vision HDR, HDR, HDR10, and HLG make it an awesome screen for viewing HD movies and shows. 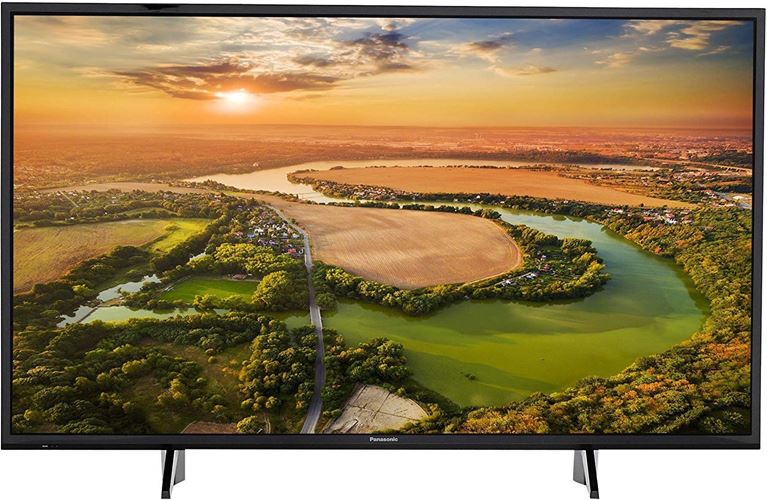 Similar to the screen quality the sound system of the Panasonic 43GX750D 4K Android TV is also very powerful. It has two 15W speakers with a full-range driver. Full range driver means loud and clear sound with balanced bass. This type of speaker driver accurately generates all three frequency ranges. Hence, on this Panasonic TV, you will here clear dialogues, songs, and commentary.

Consider this Panasonic TV if you are looking for a 4K LED TV, which has almost no cons. I have no doubt in my mind that it is the best 4K Android smart TV under 50000 Rupees. It comes with 4K upscale technology, too. So, it will show even 800×480 and HD channels in great quality.

The 43-Inch LED TV model is the latest LG 4K TV in India market. Currently, it is the best LED TV under 45000 Rupees. The reasons are its excellent build quality, outstanding picture quality, and incredible sound quality. Also, it is a fully smart TV with AI. 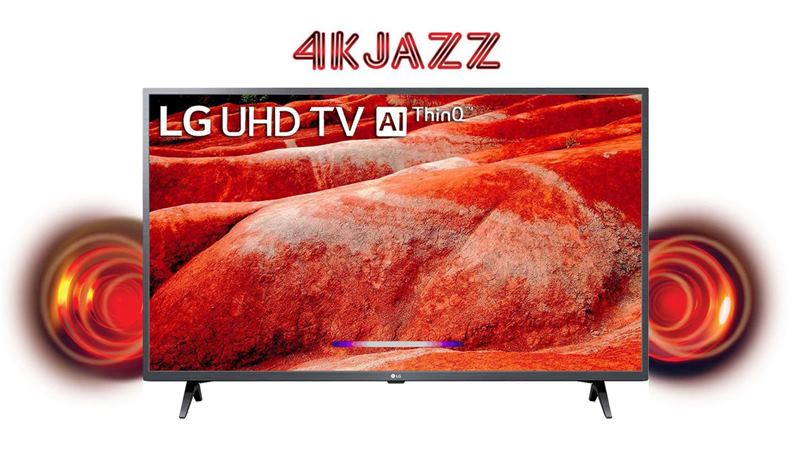 This smart TV comes with next-generation Artificial Intelligence that optimizes its screen, sound, and other features for better user experience. You could harness all its features by controlling them through voice command, remote mouse, or remote keys. LG provides its iconic magic remote with this 43-inch 4K LED TV.

LG 43UM7780PTA LED TV is also a fully functional music player system. This TV model comes with a 2.1-Channel speaker configuration and having three front-firing speakers. Its sound technologies are Dolby Digital Plus with DTS surround sound. Out of its 35W audio output, 15W is from the woofer and 10W from each of the front speakers. With the feature to switch off the TV screen completely, while the speakers remain active, it becomes an actual sound system. Isn’t it awesome? Check all other great features of this LG 4K Smart TV below in the specs table.

After carefully examining all its features and functions, I have no doubt that the LG 43UM7780PTA TV model is the best LED TV in 40000 Rupees ranges presently. Go for it!

The Samsung smart TV is a recent launch in the market. However, the features, functions, screen quality, build quality, and sound quality of this 43-Inch TV is so good that it has become a best-seller in a short period. Its current market price is 44900 Rupees. Besides its smart features and functions, its 40-Watt speaker system with Dolby Digital Sound Technology makes it a superior choice than other brands’ smart LED TV under 50000 Rupees.

Samsung UA43N5470 smart TV comes with tons of convenience features. It is not just a TV, but also a fully-functional music system. You could also use it as a personal computer by pairing and mirroring your laptop screen to its 43-inch big screen. Live Cast is another exciting feature of this Samsung TV that allows live streaming between your smartphone or laptop and the TV. Whereas 2-Way sharing allows the user to watch smartphone content on the big TV screen and seamlessly import files from the tv, like recorded programs.

Everything is excellent about this Samsung full HD smart TV. However, does it make sense to invest in a full HD TV today as the market share of 4K content is growing fast? Yes, it makes sense. Full HD is still not the default content type in the India market. Therefore, the 4K content type will take at least 5 to 7 years to mature to the level where the Full HD content type stands today.

The build and design of all the variants of the TV model are excellent. Their profile is slim and has a thin bezel around the screen. In fact, the luxurious look of the Samsung TV model will be an addition to the room decoration.

There are a few areas where the Samsung NU6100 LED TV model fails to satisfy. It has fewer connectivity ports. It does not have a 3.5-mm audio jack and Bluetooth. Its remote is a regular remote, not a smart remote. Since it is not an Android smart TV, I don’t think you will get all your favorite apps installed on this Samsung 4K TV.

The cons suggested are not significant drawbacks. They are ignorable. Therefore, all the variants of Samsung NU6100 4K smart LED TV model is a recommended option in their respective price segment. Especially I suggest the 43-Inch variant as it is currently one of the best-selling 4K smart TV in 40000 to 45000 Rupees range.

The 4K Ultra HD TV boom has finally hit the Indian market, and things look quite promising for television manufacturers. iBerry is among the companies that are yearning for a piece of the cake in this lucrative TV market. The company has lately released a top 55-inch 4k TV in India below 50000 Rupees, under its famous Auxus trademark. The company’s marketers are hoping to beat bigger brands in this price margin.

Most outlets selling Auxus 4K TVs have recorded significant sales in the past few months. Perhaps this is because iBerry is trying to build Auxus as one of its flagship brands. At the moment, the 55-Inch Auxus Iris 4K Ultra HD Smart TV is the best budget 4K TV in India. Of course, other brands like TCL and QFX are selling their 55-inch 4K versions at a lower price. However, Auxus might be a better choice in terms of build quality and HDR qualities. Here is what we liked about the 55-Inch Auxus Android TV:

Clear detailing with the 4K HDR enabled Screen: iBerry concentrated a lot on the screen performance of all their Auxus TVs. Remarkably, the company engineered their latest 4K Auxus TVs with 4K HDR professional quality screens. A vast difference exists between a non-HDR 4K TV and one has HDR enabled. This discrepancy becomes clearer when both TVs play simultaneously. The picture detailing in a 4K HDR enabled TV is immersive and very vibrant. 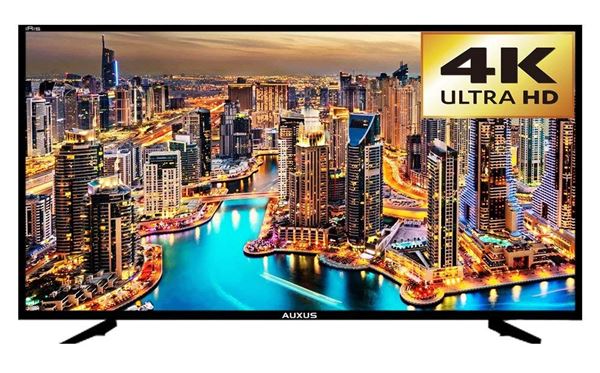 Excellent audio output with surround effect: Another reason why this TV is one of the best 4K UHD Smart TVs in India is the fact that it has excellent sound output. This smart television has two 10-Watt speakers that collaborate to give a rich audio surround effect. Nonetheless, we felt that more could be done to match the sound output to Sony’s similar version of this TV.

Powerful and Stable core: – A 1GHz processor with 1GB RAM powers this brilliant 4K TV. Additionally, it runs on Android OS and has an 8GB internal memory. The engineers, however, included a Pen drive port together with external HDD support. You can use either a USB drive or an external hard drive to expand the storage memory if you wish.

Lots of Connectivity options: This best budget 4K TV supports Wi-Fi connectivity and has two HDMI ports, which you can use with your Computer or Laptop. Other ports include 1 Micro SD port, 1 VGA port, 2 AV inlets, an Audio-In port and a Headphones port.

Do you know that eggs comprise of lutein and zeaxanthin that help to look after your eyes from macular degeneration? …
Read More

Table fan or Ceiling fan! Which is better? Ceiling fans are better since they deliver air across a room. A …
Read More

Some 2,00,000 years ago, humans separated from other apes and developed a larger brain. Right from the beginning, we were …
Read More

Are you looking for a good quality dual SIM feature phone? Here are the latest and best keypad phones under …
Read More
Top