If your budget for a new LED TV is around 25000 Rupees, then follow this article. I shortlist here best LED TV in the price range of 22000 to 25000 Rupees. The shortlisted models are the latest LED TV models on sale. We examined them from every angle. That even includes postmortem of their manufacturer’s behavior in providing hassle-free post-sales service.

Which brand is best for LED TV in India market? Sony, LG, Samsung, and Vu are four of my favorite brands for LED TV. In this piece, however, I selected LED TV models for review not by seeing their brand name rather by considering their features, functions, build quality and price. Thus, here you read about – top LED TV models of – even those brands – which yet to plant seeds of their brand reputation in the customer's mind. The suggested TV models come with a big screen, full HD resolution, a powerful audio system, and many multimedia features.

The Kodak smart TV is not just the cheapest 4K UHD TV in India market, it is a well-crafted LED TV with advanced features and functions as well. Almost everything on this Kodak 4K smart TV is of top class. Therefore, it is one of the best smart TV models in India market. 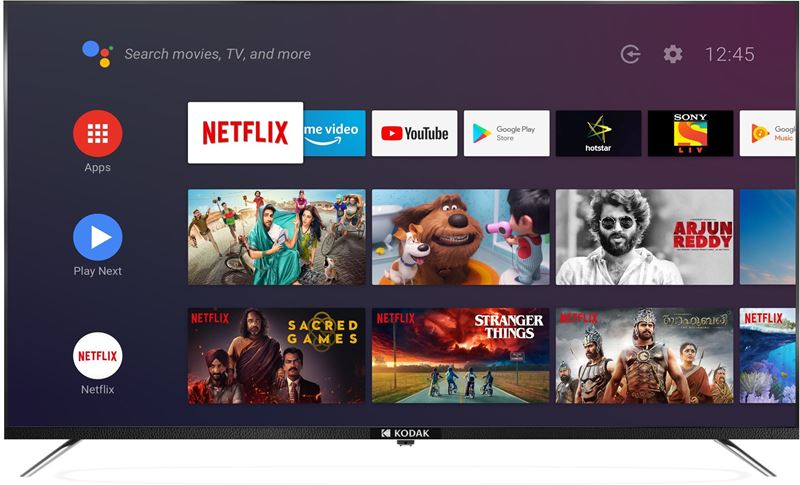 The build & design of this Kodak smart is mind-blowing, and so is its screen quality. Its 30W audio system, thanks to Dolby and DTS sound technologies, generates crystal clear sound with cinematic surround sound effects. And yes, it has the latest connectivity options wherein USB 3.0 and Bluetooth 5.0 are included.

The Kodak CA smart TV model is available in four screen sizes: 43-Inch, 50-Inch, 55-Inch, and 65-Inch. These variants have similar features and functions, and they are different from each other by their screen size. Since this 4K Android TV model is so well designed, all its variants are currently a best-selling model in their price category.

Which brand is best for Android LED TV? I would say Motorola. Because gadgets of this Lenovo-owned brand usually come with a stock Android operating system. This famous smartphone turned TV brand does not customize the Android operating system for its gadgets to add unwanted uniqueness, which eventually creates a heavy load on the system resulting in slow system response.

The Motorola 43-Inch LED TV comes with an unaccustomed Android TV operating system. Hence its performance is very smooth despite not having a high-end CPU configuration. Since it is an Android TV, all tv apps can be installed on it as long as free memory is available.

This Motorola Android TV will satisfy you exceedingly with its awesome 43-Inch IPS screen, powerful 20W Dolby sound system, and very fluid system performance. The build and design of this Motorola LED TV are impressive, too. Besides, the cherry on the cake is the game-pad, which Motorola provides free with this smart TV to play games on it. Thus, the answer to your question which tv is best under 25000 Rupees, is Motorola 43SAFHDM Android Smart TV.

The Samsung R4500 Smart TV sports a big bright 32-Inch HD screen with HDR support. So, its screen shows picture frames with more vivid colors and better contrast. Even SD channels will look better than those full HD TV which does not have HDR support.

Besides all the above said, this Samsung smart TV comes with hundreds of features for user convenience and care. Therefore, It is an excellent LED TV for you if your budget for a smart TV in the range of 25000 Rupees.

Sony is Sony. No brand can replacement this Japanese brand. The screen and sound quality that Sony offers is hard to reach by other brands.

A standard TV with Amazon Fire TV – advantage or disadvantage? In my opinion, it is an advantage. The black & white TV in my home still works fine. Generally, a LED TV lasts five to seven years. I do not think any smart TV could last even five years. The newest update in the software will force you to get a new smart TV every after two to three years.

However, if you can separate smart functions of a LED TV from its regular operation, then your standard LED TV may last more than 5 years. The solution for the separation is Amazon Fire TV. Plug it with your current non-smart LED TV to make it a smart TV, which can play all the popular TV apps in India market.

The Sony R422F is an HD LED TV. But its screen quality is far better than the Full HD LED TV of other top TV brands. Another reason to consider this Sony TV is its 30W powerful sound system. Built FM radio makes it an all-in-one entertainment system, withal.

The latest Sony smart TV in India market is the Sony 32W622G LED TV. It is almost twice as expensive as its alternatives on the market. Yet, I recommend it. The reason is Sony trust. Don’t worry about HD screen quality because Sony HD screen means full HD screen of other brands. You will agree with me that no company can beat Sony for display and sound quality. This 32-Inch HD Smart TV under 25000 Rupees proves it well.

Besides the incredible screen, the best feature of this Sony 32-Inch Smart TV is its 30W audio system in 2.1-Channel configuration. With the 14W subwoofer, this TV produces audio with crystal clear deep bass. You will watch movies and tv programs in the cinematic audio format since Sony equipped this TV model with Dolby digital sound technology and DTS surround sound effect.

The Sony 32W622G smart TV is not an Android smart TV. Its operating system is Linux. And, its smart remote comes with a one-click button for Netflix and YouTube. Presently Hotstar is the only TV app from the list of most popular TV apps in India market not supported by the Linux operating system. Still, you would be able to access Hotstar through built-in Browser.

I liked this 32-Inch Sony Smart TV with 30W Dolby sound system. It also has an FM radio. Thus, Sony 32W622G TV is an all-in-one entertainment system: A Smart TV, a speaker system, and an FM radio. Therefore, it is one of the best smart TVs below 25000 Rupees.

The screen quality of this Kevin 4K smart TV is brilliant, and so is its sound quality. It comes with 30-Watt high fidelity box speakers. With multiple connectivity points onboard, it is a perfect home entertainment solution at an affordable price. The built-in audio system produces loud & clear sound with deep BASS. So, you will thoroughly enjoy watching movies and listening to songs on this big screen 4K LED TV.

Further, the Smart TV interface to access installed and online content is user-friendly. With the help of Web Touch remote, exploring features and switching between options is a lot easier. You can install apps, share content, play games, and access to your social media profile as well. The smart sharing and screen mirroring features make it fully compatible with Android smartphones.

There is no LED TV in the market in 25000 Rupees as good as this Kevin 49-Inch 4K smart TV. Therefore, buy it without a second thought.  Super slim design, excellent screen, powerful box speakers, multiple connectivity options, and smart sharing with screen mirroring feature are the reasons why it should be your next LED TV.

This Samsung smart TV is one of the best LED TVs in 25000 Rupees budget, currently. It is an ideal LED TV for home use, especially for a bedroom. Its picture quality and sound quality are excellent. It also has the screen mirror feature to share a smartphone screen to its 32-inch high definition screen.

Further, the HyperReal Engine of this Samsung smart TV makes the footage feel alive on the screen. The Wide Color Enhancer technology is excellent at painting the videos with vibrant colors.

This Samsung smart TV impresses with its picture quality but amazes with its audio quality. Happily, consider Samsung 32N4300, as it is undoubtedly the best TV to buy at 25000 Rupees price at present.