Which is the best smart TV under 15000 Rupees? In this piece, we cover the best-selling smart TV from 10000 to 15000 Rupees range. The recommended smart TV are from top TV brands in India market, such as LG, Samsung, Panasonic, Onida, Vu, Kodak, and others.

Consumers in India know the brand Toshiba for laptops. However, this Japanese brand makes high-quality smart televisions, too. Toshiba smart TVs are made in India but designed in Japan. That is interesting!

Toshiba has an excellent smart TV for you if your budget for a new Android TV is below 15000 Rupees. The current market price of the Toshiba TV is 14990 Rupees. Those who bought it have recommended it to others.

The screen size of the Toshiba smart TV is 32-inch, and the screen resolution is HD. For enhanced picture quality, clarity, and contrast, this smart TV has “Color Re-Master” and Contrast Booster, the two signature innovations of Toshiba. Similarly, the sound quality of the Toshiba smart TV is mind-blowing. Primarily because of the DTS surround sound technology! Other features that make it a better option than other smart TVs under 15000 Rupees are frame-less design, dual-band Wi-Fi, Voice Control, and latest Android TV operating system.

The Toshiba smart TV, therefore, has the features and functions to justify its current market price. Go for it without a second thought.

The smart TV of the Acer brand is currently the best Android TV in India market under 15000 Rupees. Awesome screen, powerful sound, premium design, and lots of connectivity options are its key features. Go for it before it becomes out of stock.

The Acer AR32AP2841HDFL Smart TV comes with an HD screen and the panel type is VA. Its box speakers generate load and clear 24W sound. Because of the Dolby sound technology, the audio quality of this Acer TV is mind-blowing.

The build and design of this Acer smart TV are extraordinary considering its current market price. From three sides the screen is almost frame-less which indeed improves viewers' experience. Then several built-in connectivity points make it easier to connect this TV with external things.

You should buy an LG TV because it is one of the best brands for long-lasting LED TV with a vivid real color screen and powerful sound system. And, smart TV is today’s requirement. Currently, the LG 32LM560BPTC LED TV is the only LG smart TV model available below 15000 Rupees. 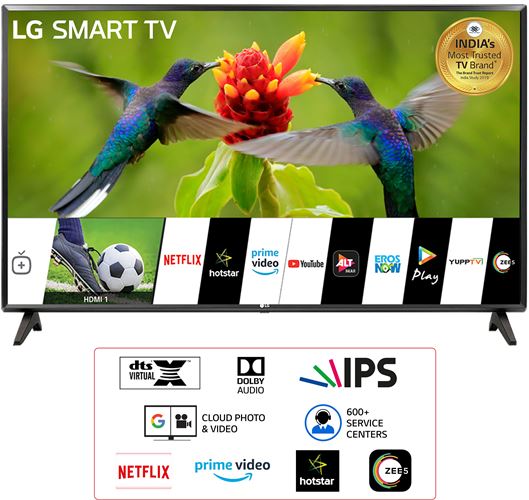 Screen and sound quality of this LG smart TV are much better than big screen full HD televisions of other favorite brands from the same price range. So, consider it if a big screen LED TV isn’t your priority over incredible screen quality and crystal-clear powerful sound.

This Vu 32-Inch smart TV is mind-blowing. Currently, it is one of the best IPS smart TVs under 13000 Rupees. Its picture quality is amazing and sound quality is thrilling. By virtue of being an Android TV, it supports all those TV apps that are listed on the Google Playstore. Moreover, you will never experience any system and software issue with this Vu 32-Inch smart TV.

Why should I consider the Vu Cinema 32UA Android TV? Because its screen size is 32-Inch, the screen panel is IPS, and it comes with built-in 40W front-firing speakers. Dolby sound technology makes the audio quality of this Vu TV from better to blasting. What more can be expected from an IPS smart TV which is priced just 12990 Rupees?

The Mi smart TV comes with several exciting features and functions. Powered by Android smart TV operating system, this TV supports almost all the noble features of Android, including Google Voice Search. Other useful features of this TV smart TV are its 20W sound system with DTS sound technology, multiple connectivity points, and a superior build & design. Since it is an Android smart TV, so there is no question of whether it can support this TV app or that tv app. You can install all the tv apps from Google Playstore and use on this smart TV.

However, the opinions of those who have bought this Mi smart TV do not suggest that it is the best LED TV under 13000 Rupees. The picture quality and sound quality of this Mi TV is mediocre, they suggest. Therefore, I recommend Sanyo 32A081H smart TV as it comes with better picture quality and sound quality. This Sanyo 32-Inch LED TV with 16W Dolby sound is one of the smart TVs under 15000 Rupees. And remind you Sanyo is a Panasonic brand.

Are you confused because of so many big screen LED TVs with catchy specs in the market? Vu is the market leader in the budget LED TV market in India. Most of my friends have a Vu LED TV. They are happy with my suggestion even today, after two, three years.

This 32-Inch Vu HD TV is a smart TV. So, you can watch on it — movies, TV programs, and also online videos from YouTube, and Netflix. Its picture quality and connectivity options are better than its alternatives in 13000 Rupees price range. 20-Watt audio system with Dolby Digital technology is the cherry on the cake, withal.

This Micromax LED TV features DLED backlight technology, which is much different from the standard ELED backlighting. Instead of throwing the light from the edges, in the DLED technology, light is thrown from behind the panel itself, which results in higher and equal brightness all over the screen.

You can also use this Micromax TV as a computer monitor. Moreover, you can change the display color scheme using the onboard firmware. The sound quality can also be modified according to your needs with the help of 5 band equalizer, withal.

The Sanyo smart TV is currently the best Android smart TV in India market below 12000 Rupees. It does not disappoint with its screen, impresses with its sound, and wins the user’s heart by the bezel-less screen design and built-in smart features.

Things that go against this Sanyo Android smart TV is the use of DLED backlight in its LCD screen. There are three types of LED backlight: DLED, Edge-LED, and Fully-Array LED. The screen quality and clarity of an LCD screen will be much better if the backlight is Edge LED instead of DLED. IPS screen panel although saves this Sanyo smart TV and does not let it fail on the front of screen quality.

On the other hand, the sound quality of Sanyo 32A170H IPS Smart TV is excellent. Its 20W box speakers with Dolby digital generates crystal-clear loud sound.

Apparently, with its latest 32-Inch HD smart TV, Sanyo provides more than one should expect in 11490 Rupees as per the market trend. However, before you decide to order it, check this LG smart TV once.

Other great features of this Motorola Android smart TV are its outstanding screen quality and powerful sound. Its screen display panel is IPS whereas its sound technology is Dolby. We have discussed all its features and functions in our video presentation.

Does speaker magnet size matter? Yes, it matters. But that is just a small part of a long story of …
Read More