It would be pretty hard, rather impossible to find a home without a flashlight. Earlier because of the backward technology, the bulb inside the torch used to fuse or sometimes even burst which caused a lot of disappointment and agitation in case the lights went out. Although in today’s date, there are some extremely good and lit torches available in the market.

iBell is a popular and trustworthy brand for high-quality Made-in-China products at affordable prices. This brand primarily sells electronic products including well-made rechargeable LED torches. Because of superior build quality of its long-range torch, they are currently the best-selling options on the market.

The build quality of the iBELL long-distance rechargeable LED Torch is outstanding. Its body is made of Aircraft Aluminium. So, it is light in weight but is very strong. 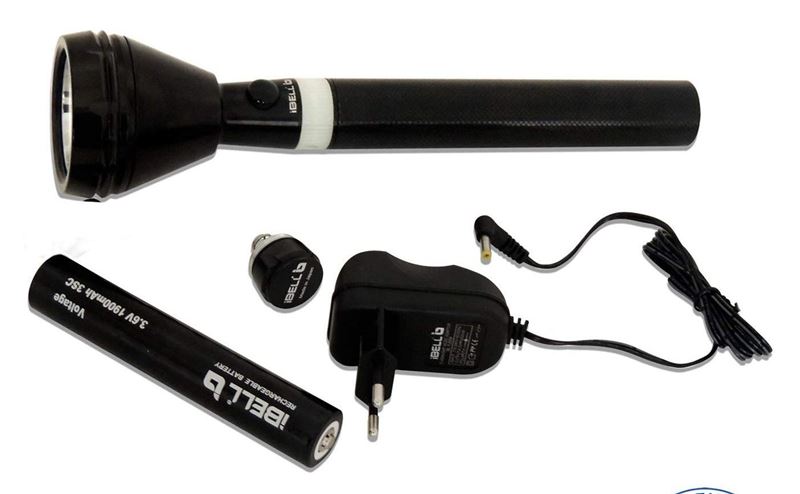 An LED flashlight or torch is looked for when there is no light. And, when there is no light then it is difficult to find the torch even it is nearby somewhere. That will not happen if you have this iBELL emergency light torch. It features a night glow band that illuminates in dark. That helps to locate it easily.

Although the iBELL brand claims for a light throw up to 2-KM by this LED torch model, it is just 400 to 600-meters in reality. Yet that proves the high caliber of this LED flashlight. Please note, there are various factors that disturb visibility.

This iBELL torch without battery is very light thanks to its superior build quality. However, with the 1900-mAh battery, it weighs close to 500-grams. Indeed heavy! But the good thing is its battery life is excellent. That is close to 3-Hours. An LED Torch flashlight is not an LED bulb. Thus, 3-hours of battery life means 3 to 4 days of usages of this iBELL LED torchlight before charging it again.

Mr. Light brand, established in 2004 is also known as Moonway group is based in UAE. It has a prominent role in the development of the lighting industry of the Arabia Gulf region for over 10 whole years. It even holds a genius world record for the world’s largest LED torch ever manufactured.

Most of the flashlights, when used in continuation, start to dim their light and slowly get weaker. This is one of the most common problems with any kind of torch, especially the unbranded ones. This does not happen with the flashlights produced by Mr. Light as it comprises of the MC2 technology. If you are wondering what ‘MC2’ even means, it is an equation derived by Albert Einstein which represents the energy, speed, and mass of light.

The distance the light of this Mr. Light torch model goes is 1500 meters, which as a matter of fact is pretty good. Seeing 1.5-kilometer is something that the ordinary flashlights do not possess, making this a plus point over others. Furthermore, this torch runs for at least 2.5-hours without the dimming its light in proper continuation which I personally believe is a reasonable period.

Concluding it all!!! This Mr. Light LED flashlight is something good and will not let you down if you invest in it. The company majors in flashlights. It even has a genius record for world’s biggest flashlight, gives the best quality you expect for the everyday usage flashlight and has many happy clients too! Every person who bought this torch has been delighted with it — which is also adds up to its advantages.