Which is the best desktop motherboard under 10000 Rupees? This review article covers the best-selling computer motherboard from the price range of 5000 to 10000 Rupees. The suggested motherboards for desktop are currently a top favorite of buyers.

The features of the MSI PRO H610M-G motherboard are very impressive. It comes with a dedicated slot for SSD and has four SATA III points for SSD or HDD or both. Besides, it has all the latest connectivity options.

Using SSD Hard Drive alone can boost the speed and reliability of a computer system by 10 times. Yes, that is correct. The MSI H410M Pro-E motherboard does not come with a dedicated SSD slot, though. That does not mean SSD cannot be a hard drive if this MSI motherboard is used. Apparently, having an SSD slot means having an M.2 slot. Instead, a 2.5-inch SSD can be used, and in the same way as an HDD is used.

All other features for better performance and security make the MSI H410M motherboard an awesome choice. Does it worth it? Should you buy it? Is it the best option with the Intel chipset? These questions are answered in our video presentation that covers almost all the essential details of this MSI Intel motherboard.

The Asus Intel motherboard is currently one of the best motherboards for advanced PCs in India market. Its current market price is only 6400 Rupees. It has the latest connectivity options, more expansion slots, high-quality hardware for better audio production, and of course its build quality is mind-blowing. This Asus motherboard is for Intel 10th and 11th generation processors.

The Asus H510M-E motherboard comes with Intel socket 1200 and Intel chipset H510. Hence, only those Intel processors that are compatible with the socket and chipset will fit on this motherboard. You could have a look at the list of supported processors in the video linked below.

The AMD Ryzen 3 3100 is one of the processors that the Gigabyte Gaming X motherboard supports. This AMD quad-core processor, which is capable of processing up to 8 thread and has 18MB cache memory, is this year’s model and currently the top-rated CPU under 10000 Rupees. Combine this AMD gaming CPU with a 4GB NVIDIA graphics on this Gigabyte AMD motherboard for a gaming system, which will handle all available games with ease.

The Gigabyte Gaming X motherboard has the AMD AM4 socket and its chipset is AMD B450, which supports overclocking. That is what is essential for gaming systems: extra juice from the CPU during the peak moment of the game. Besides, it has all those essential and advanced features, component, and design that must be on a high-end gaming motherboard. This Gigabyte AMD motherboard, therefore, could also be a perfect platform for advanced computer systems for professionals for doing productivity works.

For Intel 4th generation processors, Gigabyte introduced this high-end motherboard whose socket is 1150 and the chipset is Intel H81. So, it will support all those Intel processors that will fit in the Intel socket 1150 and supports the Intel Chipset H81. The supported processors of this Gigabyte motherboard are from the Intel i7, i5, i3, Pentium, Celeron, and Xeon series.

The build and design of the Gigabyte H81M motherboard are outstanding. Its construction seems very solid. The materials used in making its various parts and components are of high-quality. That is why they won’t fail due to high heat inside and outside. This will eventually ensure a long lifespan of the motherboard. 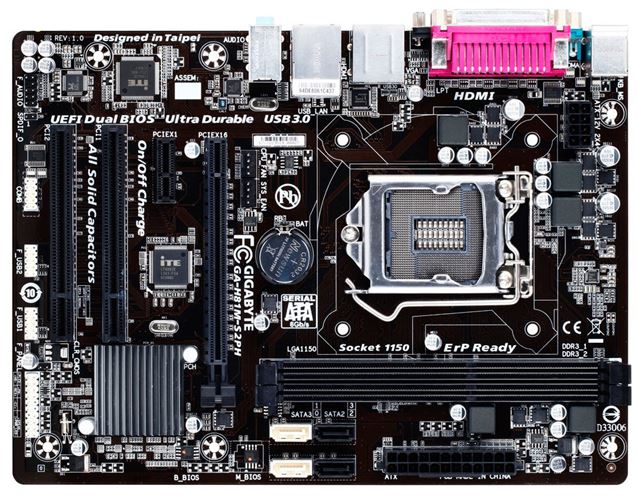 The Gigabyte H81M Intel motherboard has two RAM channels, supports USB 3.0 ports, and it also supports the 7.1-channel audio. But not having the PCI express 3.0 slots is disappointing. The version of the PCIe standard and the number of PCIe slots are essential factors in deciding a suitable motherboard. To make a system more productive and advanced the latest version of PCIe slots is required.

We covered all the features and functions of this Gigabyte Intel motherboard in our video presentation. If a 4th generation Intel processor suffice your need then here is the best motherboard to use with your selected CPU.