Which is the best kitchen weight machine under 3000 Rupees? Finally, we are ready to present our suggestions on some affordable weighing scale or weighing machine for Indian kitchens. Ideally, a kitchen scale has to be compact, accurate and capable of weighing anything in between one gram to ten Kgs weight.

Although anyone with a long cooking experience hardly needs weighing scale because over a period of time they develop a natural sense of required quantity through experience in the Kitchen area. In fact, I, too, have been appreciated for having a good sense of ingredient’s quantity.

However, my ability is just limited to the food quantity needed for four to six members. In a case cooking is on for more than 10 members, then I am not the right person to say how much salt and chilly powder and Dhaniya powder is needed.

Such scenario might occur for all ingredients when cooking for a big group of people. Therefore the best way is not to trust someone’s natural instinct rather rely on a weighing machine. A wise cook will always use his/her talent in cooking processes, not in saying – add more onions and reduce the quantity of turmeric power – because what is the right quantity of ingredients that should be used is already defined in recipe books.

A recipe book with at least 100 dishes from every part of India and a weighing machine is very necessary for any ideal kitchen. If you could manage such arrangement, your guests will always remember you for excellent food you had offered them.

There are many variants of this weighing machine. Keeping all the features same, only differences among the variants have is the capacity of weighing maximum weight in one attempt. As I am seeing in the online market, one variant of it can weigh maximum 10-kgs, second up to 15-Kgs, third up to 25 Kgs, and a recent variant can weigh up to 30-Kgs. The price differences between these variants are almost negligible.

Yes, It is made for using in kitchen area but when comes to precision, all the variant of it fails to give the result that could the other two weighing machines – I am about to discuss next will give. Understand role of this low-cost weighing scale clearly. It is more suitable for weighing more weight at once but is not very precise in terms of accuracy. If you want to weigh spice for making Biryani for 10 to 15 persons, then it is not the right scale. It is good for weighing heavy stuff in large quantity: use it for weighing Aloo, Onion, Pulse, and Rise etc. 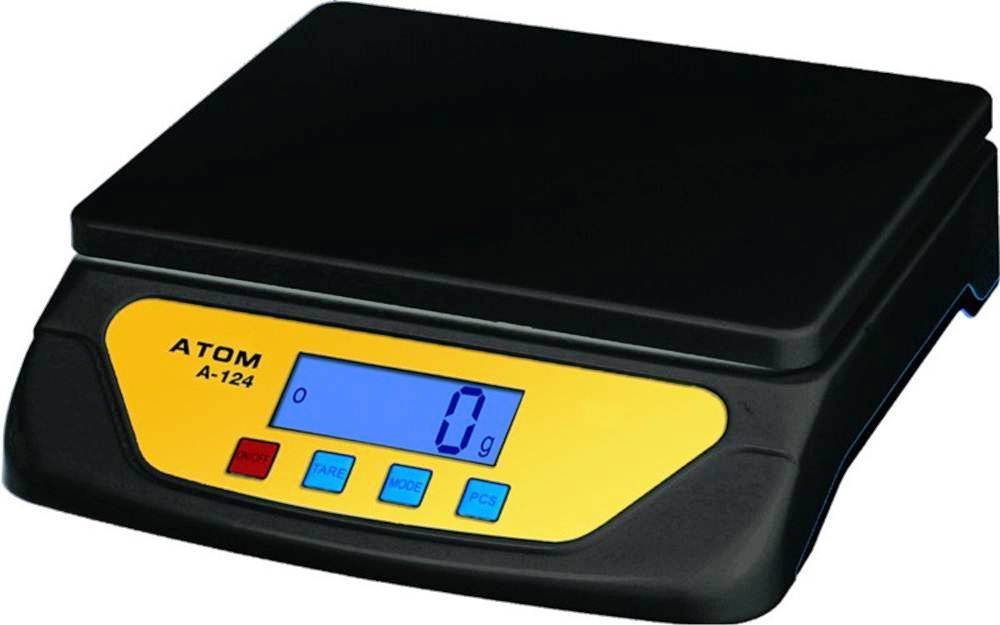 Highly accurate: When comes to degree of accuracy, Atom weighing scale stands behind the two champ discussed next here in this article; but, it is still accurate. To weigh 16-gram cumin seeds, it is not the right scale but for weighing 16 Kgs Pumpkin, it is the best electronic scale around 1000 rupees.

Built and Design: Very simple machine it is. Made with durable plastic, Atom electronic digital weighing scale is battery operated and has a digital display, too, for showing output in excellent clarity. The product looks simple yet attractive.

Being a low-cost scale does not mean it is lacking necessary features. Yes, it has the TARE function and auto shut off as well. It can weigh things of your choice in Kg, Gram, Pounds, and Ounce.

Cons: Only one month warranty

Final Thoughts: This Atom weight machine gives accurate weight. It has all the features that other weighing scale listed here have except warranty trust. Just one month of warranty does sound good. It should be at least six months.

Still, risking just 1000 rupees for such an efficient product is not a big deal. Consider Atom electronic digital weighing scale an addition to one of the two other machines listed here.

This is a popular weighing machine in market, costs just 1300 rupees. It can weigh up to five kilograms. But highlights of this device, which is, by the way, powered by two batteries, can show weight in lb (pound), ml (mile litre), and oz (ounce) and grams.

Built and Design: By looking to weighing scale market, it is hard to set a relationship between quality, capability, and price. There are many weighing machines that cost even 5000 to 10000 rupees without increasing weighing capacity.

Coming back to this product, it is not only a stylish device but sturdy and durable, too. Largely it is made with plastic, but strong enough for lasting long. LCD display panel with back-light is a big enhancement to its overall built and design. Just because of the clear LCD, it appears more advanced and sophisticated.

As you can see that it is really a compact weighing machine, and if it is used with a care, it may remain in working condition for decades. Thus, it really justifies its price of 1300 rupees.

The weighing machine requires two AAA size batteries and a low battery indicator is also built-in. If used this machine daily, one set of battery might last a month or more. 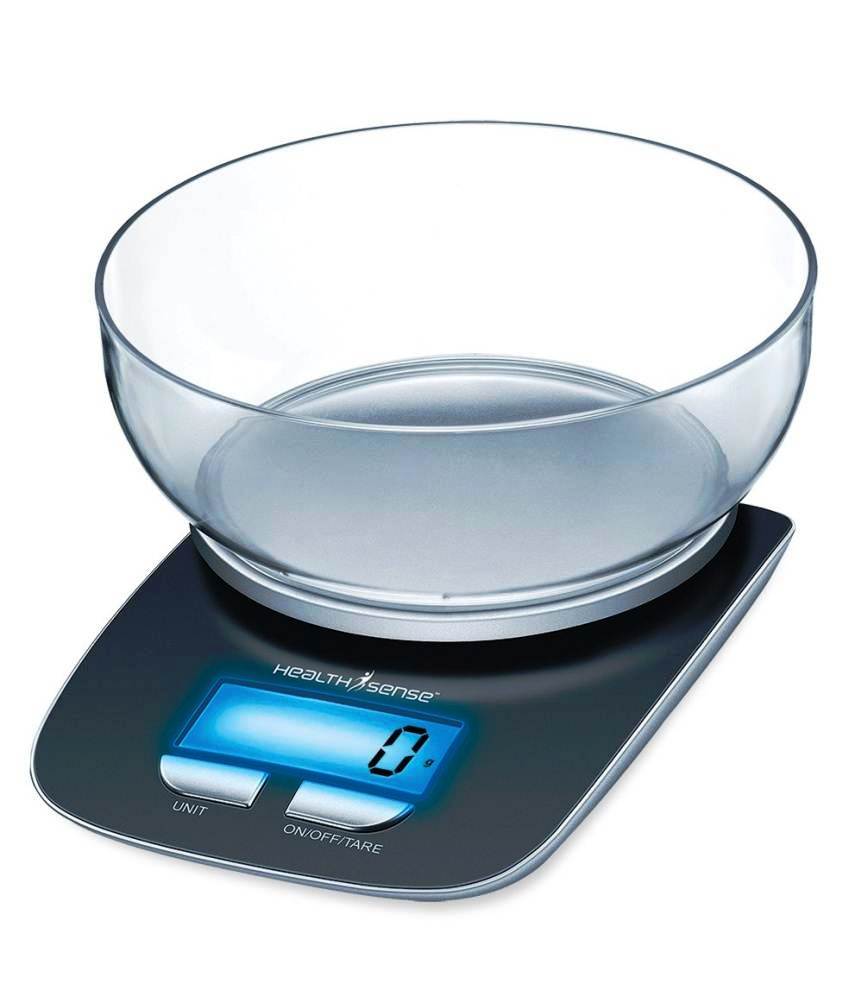 Tare Function and Auto Power-Off Feature: This is a popular feature in table-top weighing machines. If a weighing machine has this feature as Healthsense KC33 kitchen weighing machine has, users can use any container with a good base for weighing vegetables, grains, and any other things. First, put a container on this weighing machine, set the weight to “0” and now add whatever is there for weighing in it. In addition, add one ingredient in the container, and after weighing that set the machine back to zero, and continue. This makes really easy to mix multiple things in their right weight mentioned in recipe books.

Without the Tare function, a weighing machine is limited to be used only with its container. In case any damage occurs to that container, along with that even the weighing scale, too, becomes dysfunctional.

Auto Power Off: Very – very essential feature in my opinion; generally due to carelessness or sometimes due hectic tasks in the kitchen area, the end user might forget to switch off the machine – as a result, battery keeps burning without serving the need.

Healthsense KK33 is blessed with auto power off. If it is not used for a certain period of time, it will automatically turn to power off. No need to bother much about it, after weighing just turn to cooking.

Final Thoughts: All in all the weighing machine is impressive from all angles. Its price is according to its build quality and features. It looks stylish as well. Having it in your kitchen will also boost looks and feel of your kitchen. Accuracy is the best. In fact, it can measure even five to ten grams things, which is remarkable.

What makes this product different from others is that it does not look like a conventional weighing machine. Its body and container are made with stainless steel; thus, in terms of durability and sturdiness, it is far better than any weighing machine priced below 2500 Rupees.

There is no scope for having it the Tare function since its bowl or container is built-in and cannot be replaced. But this does not mean it is lacking features. To justify its price, which it has done radically – added some advanced features for increase efficiency besides just weighing.

Weighing Capacity: As the manufacturer claims, the kitchen weighing machine is approved and authenticated by the department of Legal Metrology, Government of India. In order to ensure utmost accuracy in weighing, the machine comes equipped with strain gauge sensor. It can weigh anything in kitchen area one gram to 5000 grams.

How meaningful auto off and manual off might be – I have already explained in the review of the Healthsense weighing machine above. 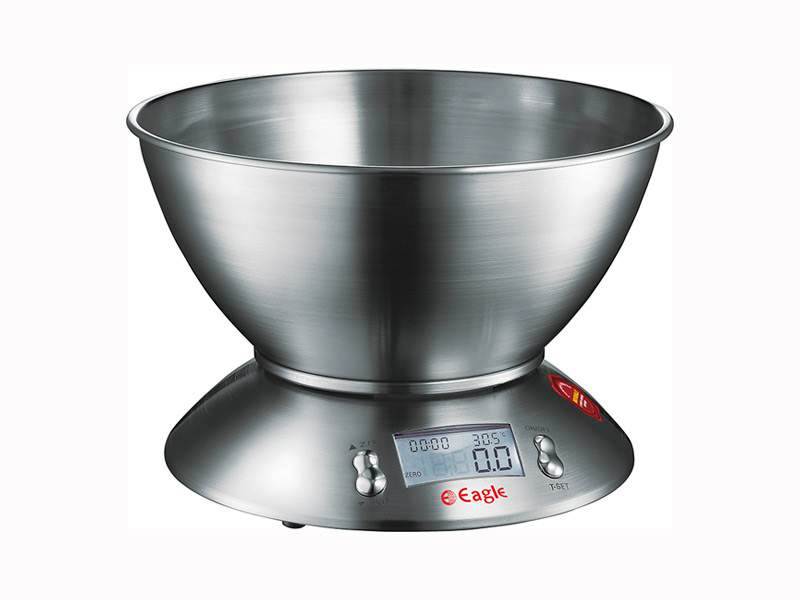 Digital display: Its digital display gets bright moonlight back-lit and is slightly bigger in size. The display panel shows output data in big font, arranged in two lines – text and numbers both appears crisp and in deep color – that can be seen even from a good distance.

Final Verdict: Eagle Kitchen Weighing Scale is all about quality, durability, extra features, and certified accuracy. Did I find any cons in it? My answer is no. Even its price is very right. In fact, it will also be a good addition to your kitchen interior. If your budget suits this weighing scale, then buy it without any second thought.