Portable scanners are the new must-have gadgets within India’s professional fraternity. For instance, if you are a lawyer in India, the easiest way to avoid carrying huge loads of case files and paperwork, is a scanner. You do not have to carry around all your client’s bulky papers from the field to the office. Instead, you can just capture every document presented to you using your portable document scanner and laptop.

The Canon ImageFormula P-201 is one of the best portable scanners in the market today. Actually, this scanner has been in the market for a while now. Nonetheless, even though Canon has released newer portable scanner models in the recent times, this legal size paper scanner is still the people’s a choice. Lucky for you, we happen to own a P-201 scanner in the office, so this review is based on real hands-on experience. 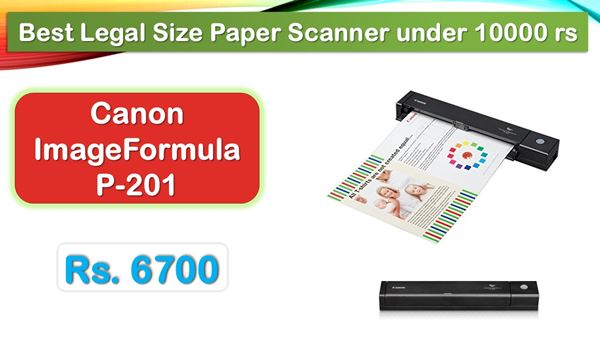 Totally portable and compact scanner: Canon kind of went to the extremes when designing this scanner. First, this device does not have a casing or a body if you may say. It only consists of the functional scanning part hence making it very lightweight and small. Someone may argue that this portability is probably the reason every guy in our office tries to carry it home.

The gadget weighs only 550-grams and measures just about the same size as your typical 30 centimetres ruler. To be exact, the dimensions are 312.5 x 55.5 x 40mm. Let me give you a head’s up though, if you are buying this scanner for use in an open office like ours, make sure you tie it around something. This portable document scanner kind of tempts everyone to carry it everywhere. I mean who doesn’t like to show off new tech right?

The Canon ImageFormula P201 only costs a fraction of this figure. Additionally, this device uses high-quality Simplex Scanning technology just like in desktop scanners. This way the scanning speeds are pretty much the same for both scanners.

Fast operation through Plug and Scan Feature: The manufacturer also ensured that P201 does its job thoroughly. For example, this device has a Plug and scan feature. This feature implies that no time is wasted when waiting for the device to boot. Basically, this scanner turns itself on automatically whenever you plug the power cord into a laptop.

Since the P201 scanner gets its power from a PC or laptop USB port, you will see it turn on whenever you plug the USB cord to your laptop. More information on how to set up this Canon scanner is provided in the manual. The average scanning speed on this device is 7.5 seconds per page (both colored and Black and white scans.)