Do ceiling fans use much power? Not exactly! The power consumption of the ceiling fan system is the lowest among the three most preferred cooling solutions in India air conditioner, air cooler, and fan. This video will help you to understand the significant difference between these cooling solutions and comparative analysis of their power consumption.

Usually, ceiling fans have a motor capacity in the range of 48W to 85W. Close to 70% ceiling fan models on sale in the market have a 72W motor. If a ceiling fan with 72W motor is used 10 hours daily at its full capacity, then the maximum power consumption will be less than 20 units in a month.

Which is the best ceiling fan under 4000 Rupees? In this piece, we cover the best-selling ceiling fans from 3000 to 4000 Rupees price range. The selected energy efficient ceiling fans are from the top fan brands in India market, such as Havells, Orient, Usha, Gorilla, Luminous and others.

Since the power consumption of this Atomberg anti-dust fan is so low, it will last three times longer on your home inverter power supply than any standard ceiling fan. Therefore, if power outage in your area is more frequent, and you mostly dependent on an inverter power supply for running fans then consider buying this super energy efficient ceiling fan. Three units of Atomberg Studio ceiling fan will consume almost the same energy that a standard ceiling fan consumes. Since its blades have a dust-resistant coating, maintaining this energy-saving ceiling fan will be easier, too.

Usually, a ceiling fan lasts five to seven years. If you decide to invest in this Gorilla 5-star rated ceiling fan, you will be saving not less than 5000 Rupees during its lifespan on operational cost compared to an ordinary 1500 Rupees ceiling fan. You will recover the excess expense of 2500 Rupees in buying this energy efficient fan within 24-months of its use.

The fan also comes with a fully-functional remote controller. In nights, you don’t need to leave your bed to reach switchboard to reset ceiling fan speed for your sleeping comfort. You will have its remote next to your pillow on the desk.

Gorilla Renesa+ is a semi-designer ceiling fan with 48-Inch blades. This ceiling fan is perfect for bedrooms, living rooms, and study rooms. It comes with a BLDC motor, and its operation is super-silent. More you can learn about the BLDC motor in this article, written by Arindam Paul, one of the founding members of Atomberg Technology, the company behind Gorilla fans.

The Superfan ceiling fan with its 56-inch long wings is a perfect ceiling fan for large rooms, halls, classrooms, and public spaces. it can provide high air delivery in a large area. However, its power consumption is very less, even lesser than a standard table fan. That is because of its energy-efficient motor. It is a 5-star ceiling fan. 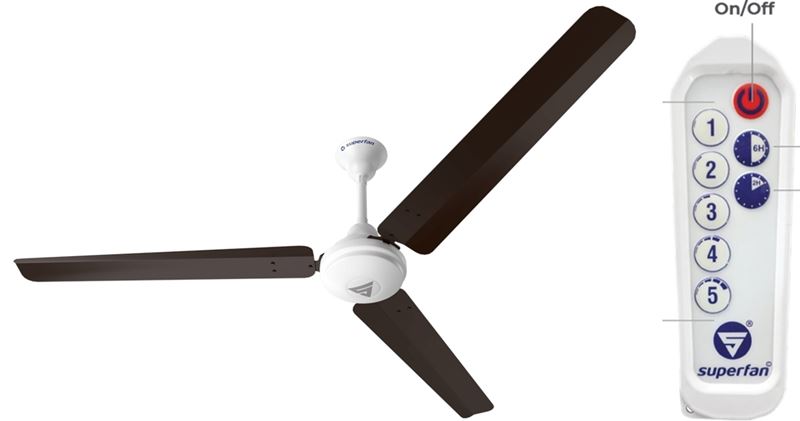 This Superfan ceiling fan comes with a BEE 5-star rated BLDC motor. A regular 56-Inch ceiling fan with a 74W motor will cost you around 2500 Rupees. For this 5-star ceiling fan, you will have to spend only 3500 Rupees, just 1000 Rupees more. I would say still it is a hundred times better choice.

Another reason to consider the Superfan Super V1 5-Star Ceiling Fan is its remote. The remote controller has buttons for fan speed selection, to set a timer, and to power ON or OFF the fan.

Most people of urban India live in small houses varying between 75 – 150 sq ft. For such small dwellings, the Gorilla Efficio high-speed but silent ceiling fan with three blades is a perfect choice.

The Gorilla fan is a super energy efficient ceiling fan. Its power consumption at its top speed is only 28W. Still, its air delivery is better than the ceiling fans of established fan brands in India market.  No matter how well the room is furnished and colored, the brown-touch of this ceiling puts everything in harmony, withal. 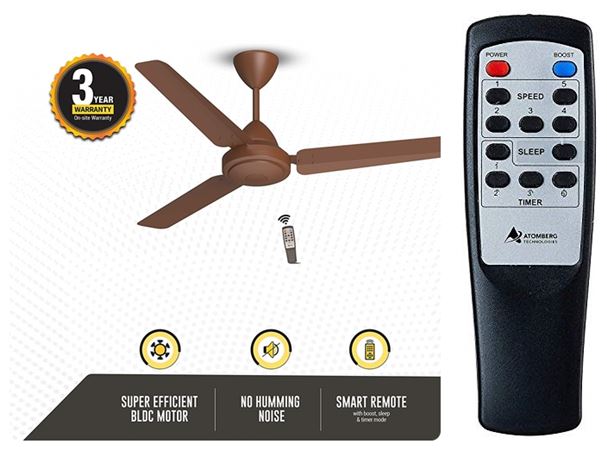 The Gorilla fan is available with 900MM, 1050MM, 1200MM, and 1400MM long blades. As per the room size, you should select the blade size (sweep). While the 900MM and 1050MM sweep fans are perfect for small rooms, and the 1200MM sweep fan is suitable for bedroom and medium-size rooms. The 1400MM sweep fan with broader air delivery coverage is an ideal ceiling fan for living rooms and central hall whereas.